All-Time Red Sox Roster: Fred Lynn
Lynn was perfect for Fenway Park and he’s perfect as the starter in center for the all-time team. 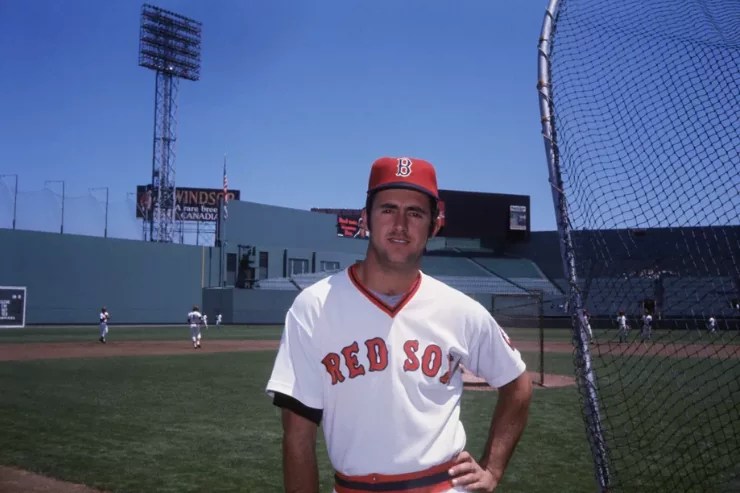 Making the case for Fred Lynn over Tris Speaker for the starting spot in center field is one that requires a substantial amount of explaining. Lynn is not in the Hall of Fame. Speaker is, having been elected in 1937 as part of the second class ever inducted. Lynn accumulated just under 50 FanGraphs WAR over his career. Speaker’s total was over 130. Both players have one MVP and one batting title. Lynn won four Gold Glove awards and was considered an excellent center fielder. Speaker is considered to be one of the greatest center fielders of all time. I focus heavily on his defense in my all-time roster article on him. On the surface there isn’t a great argument for Lynn over Speaker.

For me, though, the case for Lynn over Speaker comes down to fit at Fenway Park and fit in the all-time Red Sox roster starting lineup. Let’s start with his spot in the lineup. As you already know, Wade Boggs made my all-time roster as the third baseman and as he did for the majority of his career, he will be batting leadoff for this team. He holds a career OBP of .464 at Fenway Park, making him completely perfect for this task. Not only is that mark higher than Speaker’s .430 OBP at Fenway, but Speaker spent the majority of his career hitting in the three hole. I already have my leadoff guy and it’s hard to imagine putting Speaker and his modest home run power elsewhere.

The smoking gun for my case is Lynn vs Speaker at Fenway Park. A lot has been made over the years of how perfect Lynn was for Fenway Park. His swing seemed tailor-made for it. Over a 440 games at Fenway, Lynn hit .347/.420/.601 with 71 home runs and 149 doubles. Over a very similar sample size of 423 games at Fenway, Speaker hit .347/.430/.483 with just five home runs and 121 doubles. Speaker gets a pass for the home runs to some degree because all of his time playing for the Red Sox was during the Deadball Era. That said, he is also the all-time leader in doubles and was eclipsed by Lynn in that category as well. Both played amazing defense, but give me the guy who drove the ball like Lynn.

1975 wasn’t Lynn’s best statistical season — that honor falls to his 1979 campaign — but it is the season that most Red Sox fans remember him for. He started the year scorching hot and never cooled down. Only eleven rookies in the modern era have ever hit better than Lynn’s .331 average that season. His rookie year ranks as the sixth best by Baseball Reference WAR and by OPS+ at 7.4 and 162 respectively. Lynn finished that magical year with 47 doubles which is still the American League rookie record. He was also the first person ever to win a Rookie of the Year, MVP, and Gold Glove all in the same season, and the only one until Ichiro Suzuki replicated the feat in 2001. Suzuki did it at 27 after playing pro ball in Japan, Lynn did it at 23 after playing college ball at USC and a year-plus in the minor leagues.

There were some huge moments for Lynn during this magical regular season including a monster game against the Tigers on June 18 when he hit three home runs, a triple, and a single on his way to a 5-6 night. He finished the game with 10 RBI and 16 total bases, both Red Sox records. Lynn also hit .306/.350/.444 in the fabled postseason run that season, with his lone postseason home run being a three-run shot to put the team up 3-0 over the Reds in the first inning of Game Six. This, of course, was the Carlton Fisk game which many consider the greatest game ever played.

You can’t mention Lynn’s magical 1975 season without mentioning Jim Rice, a pair famously coined as the Gold Dust Twins. While Lynn led the league in runs, slugging, and doubles, Rice was pretty great himself hitting .309 with 22 home runs and 102 RBI. He broke his left wrist on September 22 and was unable to play in the postseason leading us into another all-time what if: would the Red Sox have won the World Series with Rice?

Lynn made the All-Star team in six straight seasons with the Red Sox from 1975 to his final year with the team in 1980. During his 1979 season he improved on just about nearly every statistical mark from his superlative 1975 campaign. Over the course of 147 games Lynn set career highs in hits, runs, home runs, RBI, batting average, OBP, slugging, and OPS+. His 39 home runs were tied with his teammate Rice for second in the American League, and he ranked fourth in runs, RBI, and first in batting average, OBP, and slugging. That same year he set the record for home runs by a lefty at Fenway with 28 in a single season. He and Rice were easily the best duo in the league during that season. With Lynn batting third and Rice right behind him nearly every day, the two combined for 78 home runs and 252 RBI while both hit well over .300.

As great as Lynn’s time was in Boston and despite how perfect a fit he was for Fenway it became clear that he would not be signing with the Red Sox long term. He was traded on January 23, 1981 to the Angels just a little over a month after teammates Rick Burleson and Butch Hobson were shipped out to the same club. A little less than two months later Fisk would sign with Chicago and nearly the entire core of the great ‘70’s Red Sox were gone. Just Rice, Dwight Evans, and an aging Carl Yastrzemski remained.

Much speculation has been made over what would’ve happened if Lynn had stayed and many believe he’d have a plaque in Cooperstown. Lynn was a .264 hitter on the road and his skills never quite translated to the same degree as an Angel. He was also plagued by injuries and said, “I really didn’t have any holes in my game other than the fact that I couldn’t stay on the field for the second half of my career.” Although he made three more All-Star teams out west he was never as dynamic outside of Fenway.

His legacy with the Red Sox is as one of the best young players to ever play with the team, albeit over a relatively short period of time. His performance, coupled with an inability to come to an agreement with the team on an extension, reminds me of the recent situation with Mookie Betts. The latter played in 794 games with the Red Sox hitting .301/.374/.519 with a 134 OPS+ while Lynn played in 828 games with the team hitting .308/.383/.520 with a 141 OPS+. Both players won an MVP and four Gold Gloves. Lynn has the edge with more All-Star appearances and a Rookie of the Year, but Betts was the better defender (albeit in right field), earning the Wilson Overall Defensive Player of the Year Award in 2016. When we think of the greatness of Lynn it’s good for younger fans to think of him similarly to how we currently think of Betts.

Over the course of his career Lynn had moments that put him among the greatest players in the game, but ultimately his undoing was injuries and his move away from Fenway. He may not have had the perfect career but he did have a nearly perfect six-plus years with the Red Sox. I said at the beginning of the project how much I valued peak and fit over career longevity, and it’s for that reason that Lynn gets this much deserved spot.